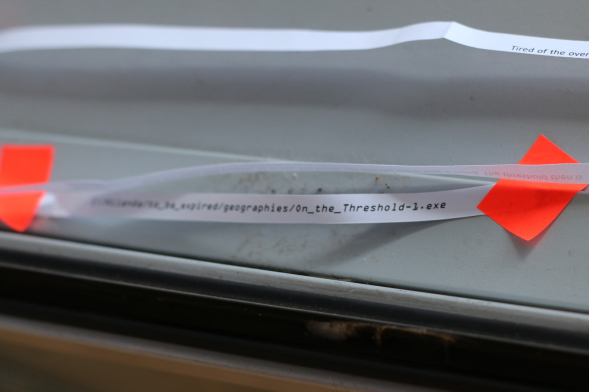 ‘Like everyone else, I presume, I feel an attraction for zero points, for the axes and points of reference from which the positions and distances of any object in the universe can be determined:

As such, mere curiosity took me to the threshold, and on the threshold. Which is not a defined place, but rather an in-between space. Or better yet, a region that joins otherwise distinct entities (in terms of inside and outside) just as it marks a separation of an otherwise continuum. The threshold intrigues me: Could the threshold be that zero point from where our position in the universe can be determined?

Not long ago I was reading Perec’s Species of Spaces as an antidote to the collective political madness. Reading him is always soothing when normality begins to mount and overwhelm. It is as if in the quotidian, and in the simplest minutia that makes up our life there is a soothing clue into the bigger issues. It seems to me that trying to mark zero points remains an agenda to many: national territories, economic boundaries, psychological space, institutional validation, the public and private, the social and the individual, religion, art, and so on and so forth. There seems to be a need to mark a territory and to perforate it. The intention to define entities (fields, beliefs, markets) is like trying to define space, and often begins by questioning what is “round about or inside it.”[2] Are you an artist? Are you in the market? Are you an outsider to the field? Labels are often used to determine a position with the underlying question: Are you in or out? In determining a territory, a contradiction arises:  defining a given entity brings about an inevitable confirmation of a series of other peripheral entities. And then, a series of interconnected smaller bits replace the notion of the one, the ultimate and almost God given answer to the question of interiority.

Tired of the overwhelming universal quest, I embraced the eternal return to point zero at a much smaller scale: home. Could the point of reference be the wall? Soon in my enquiries, I was dealing again with political agitation: the wall. What are walls for? ‘I put a picture up on a wall. Then I forget there is a wall. I no longer know what there is behind this wall, I no longer know there is a wall’[3] says Perec. Certainly, the wall (yes, that wall) aims to forget what is on the other side. But back again from a nation’s delusion to the immediate quotidian, back at home, what marks more abruptly a separation from the inside and outside, is the door. The door operates better at imposing partition. It separates better simply because is a spatial devise that enables control, because is permeable. When you call a friend to say I am right outside your house, where are you standing? I doubt you are at the back wall. Perhaps the door constitutes a better point zero. And therefore, perhaps, instead of a wall there should be a series of doors separating countries, one next to the other.

There is, nevertheless, an obstinate desire for the wall. Could the wall, aiming to mark a boundary, determine a nation position’s in the Universe? Could it be the nation’s longed-for zero point? The wall is proposed as a symbol. Saying or reading WALL is intended as a psychological act: are you like us or not, or more like, you are NOT one of us. Is the wall what separates from others or, ‘is it nothing more than a support for the picture[4]’? I would suggest to hang a picture on such a wall to then, as in Perec’s apartment wall, forget the wall entirely, and, then, forget about the picture. Perhaps the picture should be that of a door. Both symbols cancelling each other. Hidden in the utterance WALL there is desire to forget. It aims to forget the continuous space, which is otherwise better distributed by the threshold.

The proposal of the wall in a candidate’s promise is nothing else than the allusion (or delusion) to a nation’s return to point zero. Only in the case of this nation, its inability to properly discern between reality and alternative facts has abruptly scaled up the point size, “just in case,” to the whole of the border line, just like Jorge Luis Borges’s map in On Rigor of Science.  So, the boundary is marked by the forgotten wall of our living room where we hang pictures to forget about the wall, and as if by magic, to forget about what it separates us from. Is the eternal return to the place where the spoiled brat can make his way after facing the outside-world’s unforgiving reality and where his every whim is tolerated by an overprotective, yet absent, parent. The wall, this wall, is the symbol of the empty home with forgotten walls where the lonely child can always return to not see the also forgotten pictures.

We all, certainly I, find reassurance in the certainty of zero-points. And from time to time I measure the word from the locus of my home, from the humble everyday life. Yet it is not in the walls, not even in the door where I find that point zero. That would be to fall into the trap of the symbol.   I’d like to think that there is a region between the public (the street) and private (‘being home’) which is not so much marked by a material manifestation of the built, but by a ritual. Going out and coming back is a space that unfolds, so to say, the inside out and the other way around. The threshold then is more like a sign, rather than a symbol. For a symbol, ‘is never wholly arbitrary; it is not empty, for there is rudiment of a natural bond between the signifier and the signified’ explains de Sausurre, and he adds that ‘arbitrary means that is unmotivated.’[5] It might be argued that motivation is desirable as it brings together. But the trap of the symbol is that in fact by bringing together it excludes that which does not pertain to it. That is to say, the symbol implies motivation: to delimit, to mark, and ultimately an exclusion in the guise of congregation. Its codification actively ‘involves a certain number of individuals simultaneously and during a limited period of time’[6] It is prescriptive and has the illusion of control, of power. Historically, architectural buildings had been erected to mark the town’s adherence to a religious belief. The use of the symbol of the cross as plan for churches was not innocent. The religious allegiance set in stone and represented by the cross dominated the townscapes, in such way that hardly went unnoticed by those excluded by it.  It is not innocent, perhaps, that the point zero from which all road distances in France were calculated is found in front of Notre Dame.

The region of the threshold cannot be clearly defined in time and or space.  The threshold is activated. Just as the Sausurre’s sign, is arbitrary and its articulation depends on other signs: checking on the best route, shoes on, coat on, get the keys, grab the bag, check windows, say hello to neighbour, get back in for forgotten glasses, walk down the street exercising memory into all the previous and double checking nothing is forgotten, etc. The threshold can be activated at the breakfast table! As a system, the sign thus is everything but prescriptive. It surrenders control and promotes constant reflection. (Sausurre states that ‘the system (language) is a complex mechanism that can be grasped only through reflection’[7]) The threshold then is a series of operations folding in an out each other and, in doing so, prevents forgetting.  So, my point zero, the threshold, is a kind of devise upon which the space folds in and out. The antidote to the Wall is not another symbol, but an inclusive sign.

Derrida, Jacques “The Outside and the Inside,” in Of Grammatology. Gayatri Spivak trans., Baltimore and London: Johns Hopkins University Press, 1976.

Foucault, Michel. This is Not a Pipe. USA: An Art Quantum University of California Press, 1982.